The Military Council of Catholic Women-Worldwide connects, unites, and inspires U.S. military-affiliated women to grow in their faith. As a non-profit subsidiary of the Archdiocese for the Military Services, USA (AMS), MCCW works with military chapels across the globe, and at nearly 220 U.S. military installations, to form women in spirituality, leadership and service.

MCCW-Worldwide is recognized and endorsed as the official women’s organization within the Archdiocese for the Military Services, USA. MCCW women support their military parish communities in ministry and collaborate with the chaplains according to Vatican II document, Decree on Bridging of the Laity. In his message to women, Pope Paul VI, at the solemn ceremonies marking the end of the Second Vatican Council said

“…the hour is coming, in fact has come, when the vocation of women is being achieved in its fullness, the hour in which woman acquires in the world an influence, an effect and a power never hitherto achieved. That is why, at this moment, when the human race is going so deep in transformation, women impregnated with the spirit of the gospel can do so much to aid mankind in not falling. Women, you who know how to make the truth sweet, tender, and accessible, make it your task to bring the spirit of this council into institutions, schools, homes, and daily life.”

In response to the decree, MCCW- Worldwide strives to provide the processes and programs to put this message into effect. 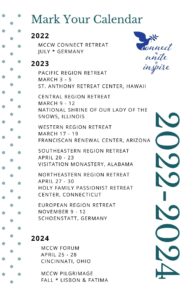 Dear Sisters in Christ, It is hard to believe we will shortly flip our calendars to October. Here in NC, fall is blowing in a refreshing respite from the long summer. I know that the heat may linger for many, and it will likely seem that not much has changed. For others in Florida and […] 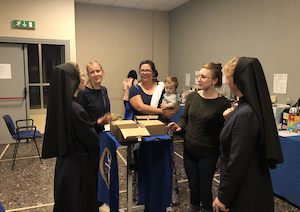 You are not alone.  MCCW offers a unique network for Catholic military women.  From leader development and faith formation to exciting regional and worldwide events, MCCW walks beside women of faith as we start ministry groups, support seminarians and create lasting bonds of friendship. Together we allow God to grow in our hearts and direct the shared growth of our organization. 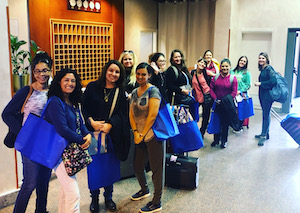 MCCW is worldwide.  We offer events and programming in six regions and at military chapels across the globe.  From small local bible studies to larger regional retreats and training sessions, there are opportunities for you to meet with other Catholic women right in your area. Dynamic speakers, open sharing and acts of service unite us and renew our commitment to Catholic values. 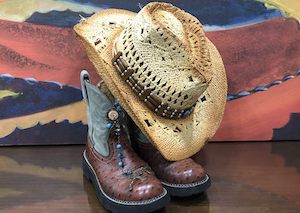 Every other year, we join together for international conferences with women coming together from all points on the compass for a time of reunion and faith renewal.  In 2020, our event was rescheduled due to the pandemic.  We recently gathered in Tampa, Florida for Forum 2022–our first in-person event in two years.  Forum 2024 will be in Cincinnati as we return to the Northeast Region to hear transformative speakers, participate in adoration and fellowship and partake of the Lord’s table in communion with our sisters of faith. 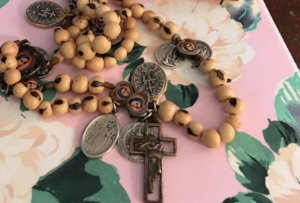 Discipleship is key to nourishing and growing women in their spirituality and leadership.  MCCW provides dynamic programs to meet the demands of modern Catholic women at all points of our faith formation. There are opportunities for leader development, ecclesial reflection, evangelization and prayer. 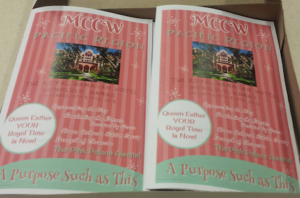 We are a resource for all women of the Archdiocese through online materials, on-site training, a bi-annual worldwide conference and bi-annual regional retreats  The conference and retreats provide leadership training and board training, spiritually enriching speakers, and opportunities to exchange ideas with women from other chapel MCCW/CWOC programs. 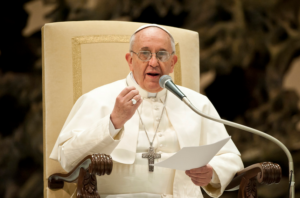 Catholic news you need to know, right at your fingertips.  MCCW is committed to aggregating the breaking news of today and bringing it to one site to make it easy for our members to stay abreast of what the Holy Father and other Catholic news sources are reporting, but also secular stories that influence or bear on our faith and religious liberties.  Check back often for up-to-date news stories of interest.