One for the History Books: A Profile of the Women Who Shaped our MCCW Awards 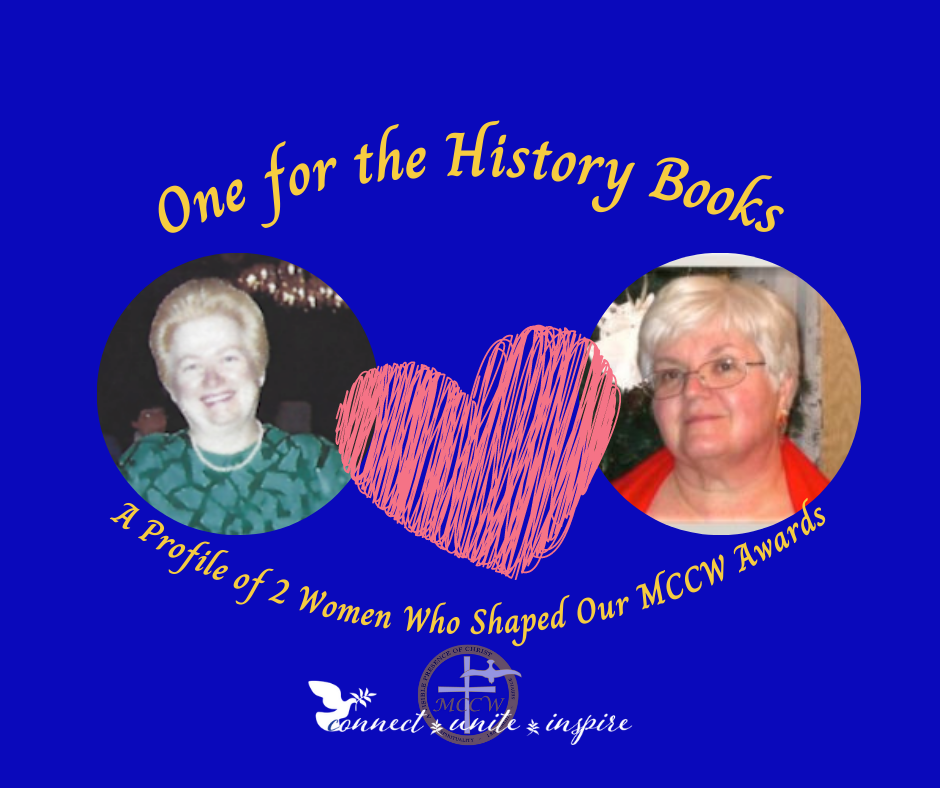 One for the History Books: A Profile of the Women Who Shaped our MCCW Awards

After summer break, it is time to resume looking back into our MCCW roots. At Forum 2022 in Tampa, I was honored to receive the Sheila Baker Award along with April Golden. This award was especially meaningful to me, because I personally knew Sheila for almost half of my 40+ years of involvement with MCCW.

I would like to tell you a little about these two remarkable women, Sheila Baker and Mary Ann Ernst, who helped make MCCW what it is today.

I first met Sheila Baker in 1986 at the MCCW-USA Conference in Denver. This was before MCCW-Europe and MCCW-USA merged into one organization. At the time, she was serving as the International Affairs Chair which oversaw choosing the charity for the coming two years. We later adopted the Seminarians as our permanent charity. I subsequently met her at other conferences while I was Western Area Coordinator. Later, we reconnected in Germany, where she was MCCW-Europe President, and I served on her board as International Affairs Chair (1992).

Sheila lived in Sembach, Germany, and was a Junior High Math Teacher. Both our husbands retired in 1993, and we returned to the States. She settled near Langley AFB, VA, and I near Fort Carson in Colorado Springs. We continued to see each other at conferences and at board meetings while she served as Northeast Area Coordinator and I as Western Area Coordinator again. She had to cancel her attendance at the last minute to the 1998 conference in San Antonio, due to surgery. It was at this time that it was discovered she had cancer.

She recovered, and we later both became Journey of Faith Trainers when that program began in 2002. This was a travel training program where we went out two-by-two to assist local chapel groups. The first presentation was at Langley AFB, and Carol Fountain and I stayed at Sheila’s home. She continued doing these trainings and other MCCW work, always connecting, uniting, and inspiring new members. Sheila last attended the 2004 conference in Tucson.

She passed away in April 2005 shortly after Pope John Paul II. I remember this vividly because her obituary said she was predeceased by her Pope.

Mary Ann Ernst was President of CWOC/MCCW at Ft. Carson around 2001, and I served as her VP. She left in 2002 to go to Europe and of course was soon involved in MCCW there – it was still a separate organization at this time.

Mary Ann worked as a Librarian in Wiesbaden, Germany. In 2006, we moved to Qatar in the Middle East, but I returned for the first Worldwide conference in Atlanta later that year. The MCCW-Europe President was there who encouraged me to join Europe, since there was no MCCW in Qatar. MCCW-Europe was celebrating its 50 th anniversary as an organization that year as well as transitioning to become a region under MCCW Worldwide. I attended the 2007 conference in Germany and reconnected with Mary Ann who became the European Regional Coordinator.

I then served as Vice President on Mary Ann’s board and traveled from Qatar to board meetings and semi-annual conferences in Germany. We both attended the 2008 Conference in San Antonio where Archbishop Broglio was first introduced as our new Shepherd.

The following year, Mary Ann returned stateside for surgery at Walter Reed where they discovered cancer. She was unable to return to Germany for the 2009 conference, so I took

her place for the last few months. My husband retired again, and we returned to Colorado, while Mary Ann and her husband, Frank, moved somewhere close to Walter Reed. Frank had been “battle buddies” with Chaplain (now Bishop) Buckon in Iraq, while Mary Ann was in Germany.

We kept in touch and I was able to visit her when I traveled east for a Journey of Faith mission to Carlisle Barracks, PA, in early 2010. We met up again that fall at the conference in Baltimore. Although quite ill, she was always ready to volunteer for MCCW even when she admitted her “life-expectancy was not good.”

Mary Ann passed away in April of 2011and several of us, including Bishop Buckon, attended her funeral in Fredericksburg, Maryland. When the Mary Ann Ernst Award was established in her memory, her husband and daughter attended the conference in St. Louis.

I hope this trip down memory lane inspires each woman to continue on in these women’s legacies, committed to connecting, uniting, and inspiring in your military chapels and communities wherever the military sends your family.