The Archdiocese of the Military Services (AMS) proudly supports 46 Co-Sponsored Seminarians.   These men have answered a call to serve both God and country and are busy completing their academic years of training and formation at various seminaries around the United States.  As plans are underway for an exciting Forum 2020, we will be blessed to have David Chacko present with us as we connect with one of these 46 promised priests.

David is the second of seven children and grew up in San Antonio.  As we prepare to gather and unite in his hometown next April, let’s take a moment to get to know him.  His parents were both Army doctors stationed at Brooke Army Medical Center at Fort Sam Houston where David was born.  The Chacko family was lucky enough to keep the same assignment until his father’s retirement from the Army.

When asked, “David, who do you admire the most?” he shares, “My mother — because of her steadfast example of faith, joy, and trust in the Lord that has shaped my own relationship with God and continues to inspire me today.”

David has always shown pride in academics.   He applied, and was accepted, to both West Point and the Air Force Academy his senior year of high school.   The acceptance letter for West Point arrived in the mail first; marking the beginning of his journey to serve the Army and continue in his parent’s footsteps.

Regarding David’s personal call to the vocation of the priesthood, he shares, “A conversion experience at the end of high school prompted me to enter into my faith more deeply. One day at Mass as a cadet at West Point, I felt a strong desire to bring Jesus in the Eucharist to others. Continued discernment led me to the seminary. I am grateful to be on this journey towards priesthood and Army chaplaincy so that I might have the opportunity to serve both God and country.”

As we prepare to gather in San Antonio, next April, we look forward to having David speak and share his journey to the priesthood.   He will inspire you and encourage you to invite others to answer the call to the vocation of the priesthood.  May God bless all of our promised priests — those who answer the call to serve a vocation within a vocation — serving both God and country. 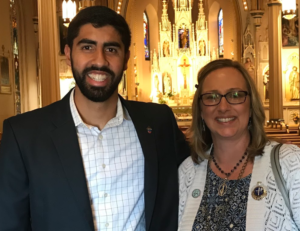