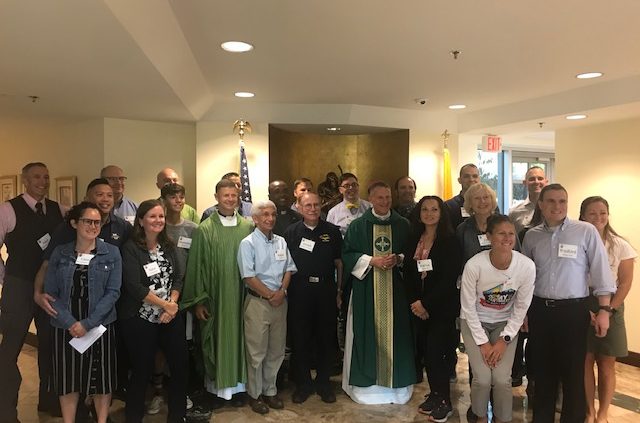 Katie Hanna is a member of the U.S. Army Reserve who supports vocations in a very interesting and inspiring way—by running ten miles! Katie was a member of the Archdiocese for the Military Service’s Army Ten-Miler Team. She raised almost $800 towards seminarian formation and Catholic religious support for servicemembers and their families stationed all over the world. Katie spoke with us about the impact priest chaplains have had on her family and why she supports the Archdiocese for the Military Services (AMS).

What impact have chaplains had on your faith life?

I love our military chaplains, especially chaplain priests. I have to credit chaplains in part for helping me and my family in surviving 23 years of military life. I’ve worked as a pastoral coordinator at three different military chapels and have seen firsthand how much our military chaplains and priests do for Soldiers and their families. They have a greater devotion because many of them work as a unit chaplain and also have a Catholic community to provide pastoral care for as well.  It’s a huge undertaking!  Many of our Soldiers and families depend on our military priests to live out their faith and make sacraments, especially in remote or deployed locations. My husband came into the faith through Rite of Christian Initiation for Adults (RCIA) while deployed.  I’m so grateful that God opened that door for him and a priest chaplain was available to help him in the process.

Why did you run the Army Ten-Miler (ATM) to benefit seminarians?

The co-sponsored seminarians are the future of our military priest chaplaincy. They are such a treasure as they are committing to serving not only as military officers but also military priests.  We need to support them however we can.

Here’s a question just for fun…how did you FEEL after running ten miles (physically, spiritually, mentally, emotionally)? Was it worth it?

I felt tired after the run but also exhilarated from accomplishing my 4th ATM.  It’s always fun to see other AMS runners, especially this year with bright gold shirts! I love being nourished spiritually at Mass as a group the night before as well as physically at the pasta dinner! For me running the AMS ATM is worth all the sacrifice.

I would tell anyone thinking about running the ATM next year — do it!  Running/walking is fine but plan and make time to train. It’s for a good cause and you’ll have lots of prayer warriors with you!. If you can’t run it, try to donate a little something toward it.  We have the power of numbers.  Together we can support our co-sponsored seminarians. 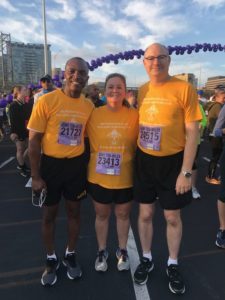